A Letter From a Mother to Her Daughter 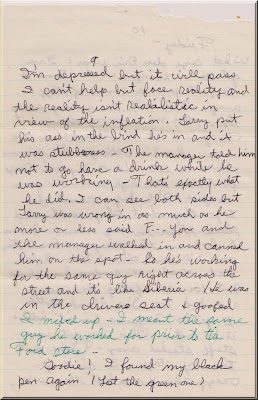 Note: As I was organizing a box of memorabilia, I ran across a letter from my mother, postmarked January 13, 1979, four months before she died in her sleep due to acute alcoholism. I believe it is one of the last letters she ever wrote, certainly her last letter to me.

She was 48, younger than I am now, an alcoholic for most of her adult life--certainly most, if not all, of my life.

I was 28, juggling single parenthood, full-time college studies, and a part time job.

I have posted, without editing (other than replacing names with initials) or editorial, this letter, minus specific identifying information.

This decision to publish has not not come lightly--I have no wish to "beat up" up on my late mother--but if one person reads this and decides to stop drinking and get help, then it will have been worth it. In a weird sort of way, my mother, in a sober state, would have likely agreed...

Please note that I'm not anti-drinking--many people are able to drink responsibly--but some people just can't handle alcohol, and Mom was one of them.

I thank you for the call last night but I'm afraid we talked a long time.

I got a letter from M. to-day. She said she was going to D.C. with Mrs. L I don't know if she she means Washington, Dodge City or Dakota City but she won't be coming out here planned in Feb. C. was coming too. Maybe she will anyway--I hope so. I lost [my dog] a year ago, the 27th of Jan. and she was here. I took him to the Vet, he couldn't stand up on his back legs and that happened in just a couple of hours--He'd been wobbly on those legs but they went all at once--I had made the appt. with the Vet that morning but he got so bad he could hardly get in the car--Well, it was check out time for him, much as I wanted to keep him going, I knew that he'd be miserable and so would we. He'd lost control of his bowels the sphincter muscles were shot all of a sudden--I had him 11 years and I went over to pet him and he put that big paw up to shake hands, his eyes brinning over with trust in me and I had to shit can him!

The day after, L. & I got married legally. M. bugged him from Simi to Hollywood and that's not a 10 block drive--He'd have said yes to anything! "Dear God, get her off my back!" We beefed all the way to the preachers and C. loved every minute of it--When we got there, the Revereands wife took down the information and said "Come on down now Honey Babe" & here comes the preacher, the incredible Hulk--The house shook--He was huge--Have C. show you the pictures--When she and L.D. were out in the spring I said "What are you peddling this time?" She said "I wonder if he does divorces" Next time she'll be peddling Leprosy!

It was pouring rain yesterday and gray all day but the Sun is out to-day and it's beautiful. I love summer here. I stay outside most of the time--We don't have any air conditioning but it isn't near as hot as Canoga Park (remember that blistering heat?) I live in bathing suits all summer--Wish the 3 of you could come out--We've got a big house, 2 patios and a pool--

I got out & got some stamps to-day--Funny how stamp can cost $23.00! I'm kidding, I got some parson tables on sale for $3.00 The kids eat off them and the ones I had were shot to hell. I picked up some dog food & blew myself to a $5.00 bottle of wine which I will keep mum about--I'm not supposed to drink at all but the Dr. conceded I could as long as I didn't go overboard. I haven't and I make sure I eat and take vitamins--For about the last five year I drank every day--just beer but if I missed a day it was a mistake! First, I gained so much weight none of my clothes fit--then I dropped it so fat I didn't realize how thin I was getting. I had D. to the surgeon for consultation and I got on his scale and thought it was broken--I was under 100 lbs. and didn't realize it and set the scale at 100--I didn't go down in a heap, one day I felt like I had to belch and it would only go up so far and stab me around the heart so I went in the hospital late at night and waged battle with the Dr. for 8 days--After the pain, I enjoyed the rest--I really didn't care if I was released or not--Color T.V., Real good food.

(I always lay a pen down and can't find it) Anyway I went in weighing 88 lbs I was so pissed off at L. and still am--He was in a bar as usual and wanted S. to take me to the hospital but S. would have stayed at his apt. had he taken me as he lives close to it--So L. got smart ass with me but came home reluctantly and took me--Poor S. got stuck with the kids for the 8 days--all this crap has been choking me and I ble BLEW up like I never have that I recall--It was like a Volcano of shit erupting I let him go for about 9 years but he never quit--It's started to show on him and he has no consideration as far as coming home for dinner etc. and is rude--or he was--I turned him every way but loose--It's now 2:00 A.M. Monday and he's out yet, but I have to put some food away and I'll be dammed if I'll run into him so I'll wait wait until he plants down for the night--what's left of it & if he gets here It's almost 3:00 A.M. now and I pray he hasn't gotten busted again

Joy Boy showed up between 3:30 & 4:00 and was noisy as hell. I had dozed off so I just took up where I left off--I wish he would leave for a while but it's not likely--I told him I'd leave but that wouldn't solve anything unless he would home, no stops, just get here During the eruption, I told him no one would put up with his action--It's not a night out with the boys--It's not once a week, It's 7 days every day

I've been bitching so much it's got to be a drag

It's a two edged sword Hon, I can't stand him around half the day

Had dinner and I fell asleep

If I don't finish this soon I'll be senile. I'm not at my peak I'm depressed but it will pass I can't help but face reality and the reality isn't realilistic in view of the inflation. L. put his ass in the bind he's in and it was stubborness--The manager told him not to go have a drink while he was working--That's exactly what he did. I can see both sides but L. was wrong in as much as he more or less said F--- You and the manager walked in and canned him on the spot--So he's working for the same guy right across the street and it's like Siberia--He was in the drivers seat & goofed

Goodie! I found my black pen again (Lost the green one)

What size does E. wear? I've got some things around--Damn it I just gave a bunch of stuff away. The kids are growing faster than they are wearing things out D. is in a 14 slim & F. still wears huskies although he's slimmed down a lot--He's a big kid--D.'s pants are all high water he's grown so fast I'll dig around for toys they don't play with and stack them in my room--I have to look in the garage, closets, etc. and I'll send them to E. I feel bad about not sending him things but we are feeling the crunch real bad too. I've already gotten to gether 2 games (intact, believe it or not) F. has got some stuff stashed away--They're past the toy stage. I didn't go crazy this X mas but they were satisfied. Unfortunetly, the older they get the more expensive it gets. I got one of those Soda streams (they make their own pop) I'm happy to say, it's not messy and I haven't tasted it but F. said it's better than the soda pop you buy--They had a thing on T.V. that said they were coming out with some thing to make bubble gum--I cringed at the thought, I could picture a web of buble gum all over the house plus a gum fight. I'm too old for that shit! If I was 12 I'd be too old for it!

We've got another German Shepard. He scares the crap out [scribble] of every one that comes here He snarls & barks & looks crazy but I don't have to worry about any intruders--Last summer some kids had some dangerous fireworks that were [scribble] against the law and were real little bombs--They drove me crazy and every dog on the street was having fits and I called the parents and told the Dad I just couldn't take it anymore. He brought them up from Mexico. He wouldn't stop them and as much as I hate the Fuzz I finally called them and found out they'd been called so many times for this corner they might as well moved in. It took them 2 hours to get here and as it was so hot I said "Let's go out back" The dog raised hell and the cop slammed the sliding door as was ashy gray colored. I said "he won't bite" I chained him up and they still wouldn't go out that door so I took them through the family room & out that way--They were so big I could hardly move more than eye level with their navel but if they busted me, they'd hand cuff me like the arch fiend of the century!

I've got a little white cockapoo named Toughie or Tuffy. She backs that dog down hands down and bites him on the balls. As I'm quite small, I learned that if you can't whip them, you sure can tangle up under their feet--

Before I close, I want to tell you how proud I am of you to be going to college and running a home & raising a son. It takes guts!

P.S. I feel much better than I did when I started.
Posted by Jennifer at 3:39 PM

Labels: A Letter From a Mother to Her Daughter, Addiction, Alcoholism, Letters, Mothers

We want your short stories, poems, essays, and plays about the Strong Liquor in your life, past and present.

Has the spirit of alcohol past informed you or your fictional characters?

If so, inquire here.